Yancey Richardson Gallery is pleased to announce Blue Sweep, an exhibition of new photographs taken in Alabama and Mississippi by American artist Andrew Moore.  Following upon in-depth explorations of the economically ravaged city of Detroit (2007 – 2009) and the mythic high plains region along the 100th meridian (2011 – 2014), Blue Sweep continues the artist’s investigation of “the inner empire” of the United States. This is the artist’s seventh exhibition at the gallery.

The result of twelve trips over three years, Moore’s work in the American South uses historic homes, both grand and modest, the preserved backroom of a Jewish social club, the curtained entry to a Freemason’s temple, a worm-eaten map of Hale County and a ruined bridge in a verdant swamp to suggest the economic, social and cultural divisions that characterize the South and the love of history, tradition and land that binds its citizens. The exhibition juxtaposes three different views of domestic dwellings which allude to these themes: the richly adorned library of a grand plantation house; a modest bare-floor bedroom decorated with emblems of God and country hung on unpainted wooden walls; and a remote trailer home with a dirt swept yard, a traditional landscaping practice brought to the south by West African slaves.

The son of a Connecticut architect, Moore has frequently used architectural structures as a means to explore themes of time, culture and a complicated history of place.  While he has often undertaken a study of place on the verge of change - the shuttered theaters of New York’s 42nd Street preceding its remaking as a vortex of consumerism, Havana just prior to the suspension of U.S. travel restrictions and early post-Cold War Russia before the embrace of western capitalism - the images in the exhibition Blue Sweep suggest a place lost in time and in full embrace of the old.

Born in 1957, Andrew Moore lives and works in New York City. His work has been featured in solo and group museum exhibitions at the National Gallery of Art, the Akron Art Museum, the Queens Museum of Art, Colby College Museum of Art, and the National Building Museum, Washington D.C. He will be featured in upcoming exhibitions at the Museum of Fine Arts, Boston and the San Francisco Museum of Art.  Moore’s photographs have been acquired by numerous museums in the United States and internationally, including the Metropolitan Museum of Art, the Whitney Museum of American Art, the Library of Congress, the Israel Museum, the San Francisco Museum of Modern Art, the Los Angeles County Museum of Art, Yale University Art Gallery, and the Detroit Institute of Arts, among others. Five monographs of his work have been published: Inside Havana (2002, Chronicle), Russia (2005, Chronicle), Detroit Disassembled (2010, Damiani), and Andrew Moore: Cuba (2012, Damiani). In 2019, Damiani will release Blue Alabama, a monograph on Moore’s work in the American South. 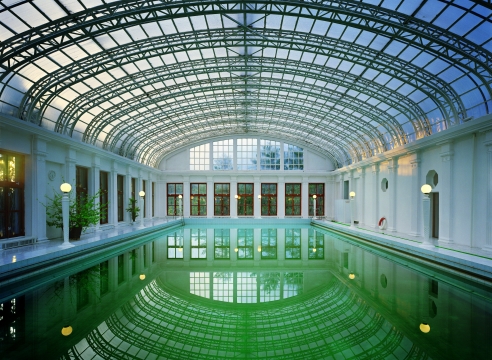 Andrew Moore
Back To Top