Over the past twenty years, Matt Lipps has developed a unique photographic practice, which he refers to as being “in, with and alongside photography”. His process begins with appropriated images, and involves collage strategies, sculptural tropes, and theater staging. The resultant works invite a dialog about the intersection of fine art and fashion, as well as bigger questions about the role of photography in contemporary society.

After cutting out pictures from books and magazines and arranging them, freestanding, into three dimensional tableaux, he re-photographs them and prints the images at a large scale. For HORIZON/S, a series made in 2010, Lipps pulled images from Horizon Magazine, a bi-monthly hardback arts journal first published in September 1958 with the intention of teaching the American public about “high art and culture”. Lipps playfully questions the hierarchies imposed by the journal, exploring what happens to the meaning of certain objects and images when you remix them into new systems and categories – altering context and scale. Lipps' aim is to facilitate “an embodied, phenomenological experience of encountering an image in a dislocated context at an unexpected size.”

In 2016, Lipps began to employ the leftover backgrounds of the extracted images as abstract layers that alternately frame and obscure the cutouts. His 2019 series, Where Figure Becomes Ground, brings together iconic 1990s fashion campaigns, mainly shot by Richard Avedon, layered on top of documentary photographs taken from US Camera Annual, a magazine published between 1938 and 1969.

The silhouettes of the cutout figures of supermodels such as Kate Moss, Cindy Crawford and Claudia Schiffer, are used as an aperture through which to view the documentary photos depicting events from WWII. By bringing these two seemingly disparate worlds together, Lipps highlights their shared visual vocabulary and the constructed nature of all photography.

Lipps’ work constantly confounds the traditional function of images. His appreciation for the physicality of photography and the tactility of the printed page is refreshing in our increasingly virtual present.

Matt Lipps (b. 1975) has a BFA in Photography from California State University and an MFA from University of California Irvine. His work is in the permanent collections of The Getty, LACMA, SFMOMA, MOCA Los Angeles, the Hammer Museum (Los Angeles), the Saatchi Gallery and the Pilara Foundation/Pier 24 (San Francisco). He has also participated in exhibitions at MCA Chicago, J. Paul Getty Museum, Museum of Contemporary Art Detroit, SFMOMA, Josh Lilley Gallery (London) and Klemm’s (Berlin). Lipps lives and works in Los Angeles. 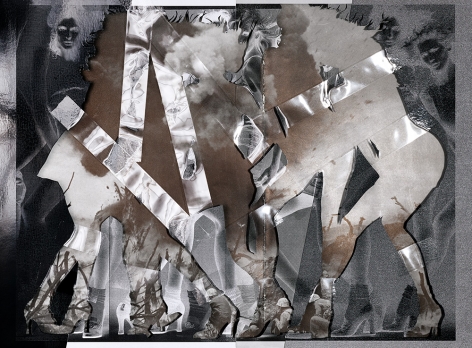