Yancey Richardson is pleased to present Fragile Land, an exhibition of new work by London-based Israeli artist Ori Gersht. The show is comprised of photographs from Fragile Land, an ongoing project in which the endangered, native flowers of Israel serve as a vehicle to investigate ideology and the mythological narratives surrounding the concept of homeland.  In the project gallery, Evertime, the first chapter in a new series titled New Orders, references the fragility and fragmentation of the European Union through the work of Italian mid 20th century painter Giorgio Morandi. This is Gersht’s inaugural exhibition with the gallery and the debut of both new series.

Throughout his career, Gersht has taken a poetic, metaphorical approach to explore political conflict and the multiplicity of truth. During Gersht’s childhood in Israel, it was common practice to visit the countryside and collect what were referred to as the “flowers of Israel”. Considered symbols of the connection between the Jewish people and their land, the plants were collected to the point of near-extinction. For Fragile Land, Gersht procured or cultivated specimens, including cyclamen, Iris Atropurpurea, and the Madonna lily, all of which have played a significant role in Israeli and European cultural histories. Then, in a highly choreographed studio session, Gersht exploded each flowering plant with a bullet fired from a customized air rifle. Using an 8 x 10 camera and Polaroid film and a high-resolution digital camera to capture the event simultaneously, Gersht has captured two different realities, one of which is so technically precise as to exceed the capabilities of human vision and the other of which has the dreamlike quality of a memory.

In many of his previous projects, Gersht has used the genre of still life painting to explore the fragile nature of existence and the duality between what is enduring and what is momentary, a contradiction embedded in the very nature of photography. In New Orders, Gersht references the instability and fragmentation of the European Union by recreating, in three dimensions, an individual painting by historical and prominent still-life painters from various countries, beginning with Chardin, Zurbarán and Morandi. For Evertime, Gersht commissioned masterfully crafted replicas of the vessels and bottles found in Morandi’s paintings. After carefully arranging and lighting them in a resolved composition, he fired on the ceramics with an air rifle, while simultaneously recording the destruction and fragmentation of the objects with a high-resolution camera. Sequences of images and panoramas relay a cinematic unfolding of destruction and collapse not otherwise visible in our normal experience of events.

Born in Israel in 1967, Gersht has lived in London since 1988. He received his MA in Photography and Film from the Royal College of Art. Gersht’s work has been the subject of solo exhibitions at the Museum of Fine Art Boston, Tel Aviv Museum of Contemporary Art, Imperial War Museum London, Israel Museum, Jerusalem, Santa Barbara Museum of Art, and Hirschorn Museum and Sculpture Garden. His work is included in many institutional collections such as The Getty Museum, Guggenheim Museum, Jewish Museum, Los Angeles County Museum of Art, San Francisco Museum of Modern Art, Tate Modern, and Philadelphia Museum of Art, among others. Support for the project Fragile Land was provided by Shenkar College of Enginerring, Design and Art, 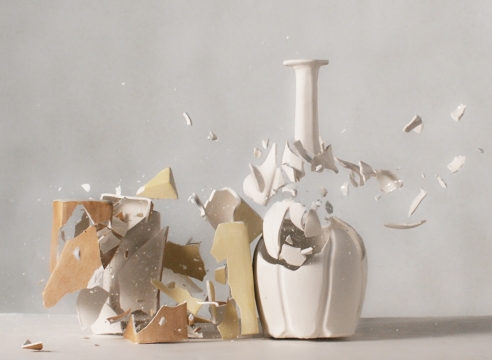 Ori Gersht
Back To Top